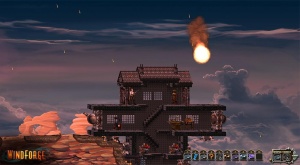 This article is a stub. You can help Windforge Wiki by expanding it.

It has been suggested that this article or section be merged with Hazards.

Meteors are a constant threat in the world of Windforge.

"There are a lot of strategies for effectively surviving in meteor showers. I don’t want to give them all away, but proper ship construction can go a long way. The ship in the video was particularly ill suited for meteor showers, since it was very dependent on the zeppelin balloon to stay afloat. These balloons are very large, so they get hit by meteors often. It’s definitely possible to construct ships that don't need balloons, and can take lots of punishment from above. If your crafty enough, you can even make ships and buildings that are immune to meteors." -Evan, Meteor Storm Escape

Since the "Meteors" seem to originate from the core and not space, they might be more correctly thought of as Tephra, Pyroclast, or Volcanic Bombs instead of Meteors.